What Does Our Junk Drawer Reveal About Us?

Ah, it is time for spring cleaning. This past week I have been on a mission to simplify and organize. Yeah, easier said than done. I began with the refrigerator, battled the Spinach Ooze of Doom and The Casserole that Time Forgot.

I stumbled away wondering how the hell I managed to buy 12 jars of pickles. See, that is the thing about being disorganized. It is wasteful. I am the proud owner of 635 pairs of scissors. They hang out with the index cards and bags of rubberbands.

Have you ever noticed that? You have to buy a BAG or rubberbands and after using less than FIVE, the bag disappears???? 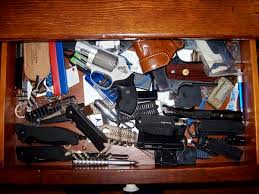 This reminds me of my nightstand drawer. Hey, I'm a Texan! If only I could find the bullets....

So this week I am scrubbing and sweeping and sorting, all the while putting off the dreaded kitchen drawers. See, I happen to be an overachiever. Most people have ONE junk drawer. I happen to have...okay all of my drawers are junk drawers. DON'T YOU JUDGE ME!

Thus, the thing I seem to put off most is cleaning out my kitchen drawers. I secretly loathe those people who can open a kitchen drawer and actually KNOW what is inside---show offs.

One morning, a few months ago, I was doing my early morning walk through the neighborhood, pondering the universe, when I had a profound thought. My life is like my kitchen junk drawer, and maybe that't why they were so hard to clean. Stop laughing. It’s true.

Sometimes, when I put in a lot of extra effort, it is neat and clean and streamlined…and then the Law of Entropy somehow takes over. It is a never-ending battle against my own selfish will to goof off. And yet, I have to admit, my junk drawer is usually one of the most interesting locations in my house.

The junk drawer is always full of things we don’t want to face—an unpaid bill, a child’s bad report card, a letter from some crazy family member we can't throw away but try to ignore. Something sticky that we just can’t bear cleaning. Do it later. Full of unfinished business. Write that "thank you" note later. Pay that bill later.

My life is also full of these things I don’t want to face—my laziness, my tendency to procrastinate, my harshness with myself and others. Stickiness that I just can’t face cleaning. Will get organized…later.

Junk drawers are also filled with things of questionable value; an extra screw that we just can’t figure out where it goes, a single AA battery that we are too cheap to throw away, but too lazy to put with the other batteries (wherever they are).

Oh, and a tiny calendar from a real estate agent that we will never use, but don’t have the guts to toss. Markers that work when you lick the tip and pens with schmutz clogging the end…but if you scribble real hard they still work. Packets of ketchup when there is a full bottle in the fridge. Packets of salt and pepper and sporks from fast food joints.

My mind, too, holds on to things of questionable value. I have all kinds of experiences and bits of knowledge that puzzle even me. I am flypaper for useless trivia, like the end of a shoelace is called an aglet and the element helium was discovered in the late 1800s when scientists were studying the sun, and it is named after the Greek Sun god, Helios.

I don’t know why I know these things, but I do. I don’t know why I can’t find my car keys, but I can remember that Washington Carver invented peanut butter and that the first thing I ever took to Show and Tell in Kindergarten was Tchaikovsky’s The Nutcracker (yeah, I am a nerd from way back).

Ah, but then there are the hidden treasures of the junk drawer; the sweet card from a husband for no reason at all, a sonogram photo that missed the baby book, a $20 bill we forgot we had, a rebate check we forgot to cash, ticket stubs from a memorable concert, or even wheat pennies and Canadian pennies that we've sorted from the real pennies since we were children.

Which brings me to my point. Yes, I have one.

Our lives are all like junk drawers; full of the messy, the missing, the mystifying and the magical. Sometimes I think that is why I became a writer, to “sort out” the junk drawer of my soul. So often my stories feature characters so similarly flawed as me. And, as I help them learn and grow…strangely, so do I.

With writing, I can find use for random childhood memories, like the smell of Breck shampoo or the taste of coconut sno-cones. Through stories, I can give them new life in new context so that they can live forever…or at least longer. Through fiction, I can tend unfinished business, like a broken heart that never mended or a dream I was too scared to pursue.

With fiction…it all oddly makes sense.

And I will continue filling the drawer with experiences and information and ideas and dreams and heartbreaks and disappointments and tragedies. Then I will sit down and sort and take what will work and then I will toss the remains back in and label them “Miscellaneous” until I find them a home.

Kristen Lamb is the author of the #1 best-selling books We Are Not Alone--The Writer's Guide to Social Media and Are You There, Blog? It's Me, Writer. Feel free to follow her weekday blog or find her on Facebook and Twitter. Kristen is the C.E.O. of WANA International and the founder of the social site for creatives, WANATribe.

We Are Not Alone!