Nearly 4 out of 5 people who are affected show no symptoms and those who contract the less severe strain generally recover on their own within a few weeks though the more severe strain cause disorientation, muscle weakness, neck stiffness, coma and paralysis. Last year there were two deaths in Tarrant County from West Nile.

Things you can do to prevent West Nile 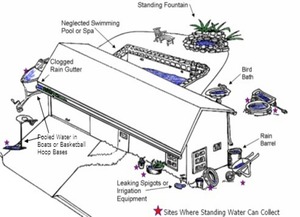 Mosquito's thrive around standing water and are most active at dawn and dusk.
These and more tips can be found on the Mansfield's Mosquito Control page. You can also find more information about mosquito control efforts on their 2013 Mosquito Surveillance Program, the images in this article were found in this presenation.